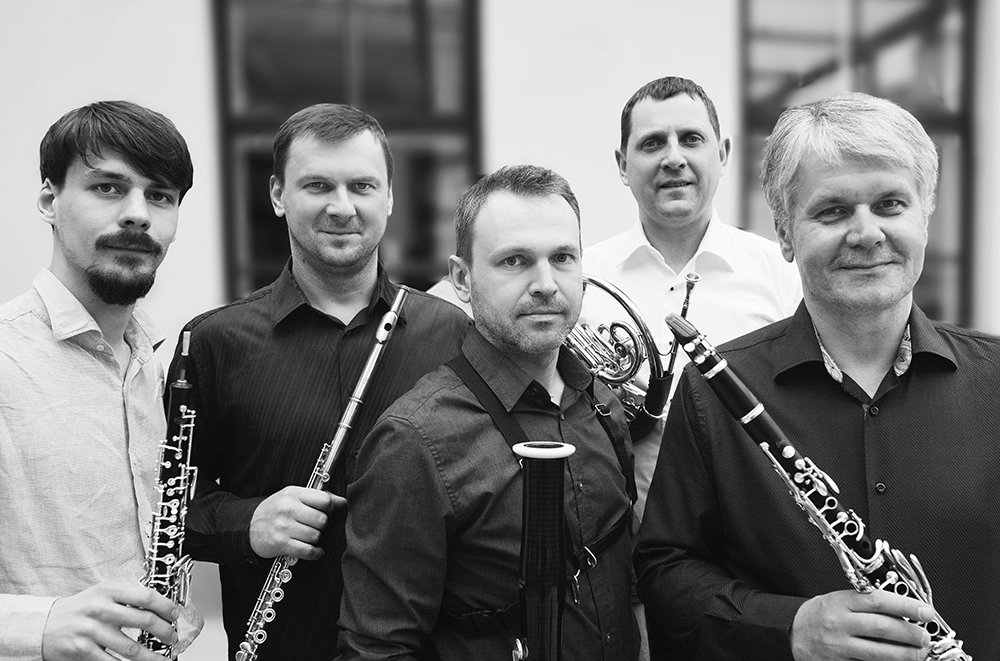 After the graduation from Lithuanian Academy of Music and Theatre as well as the studies abroad, a group of five young and professional musicians – Giedrius Gelgotas (flute), Ugnius Dičiūnas (oboe), Andrius Žiūra (clarinet), Andrius Dirmauskas (French horn) and Andrius Puplauskis (bassoon) – returned to Lithuania and decided to establish a quintet. As the result, in 2003, the Vilnius Philharmonic Woodwind Quintet was founded.

Giedrius Gelgotas (flute) – a prize-winner of Lithuanian and international competitions and a participant of many festivals and concerts all over the world. In 2002-2003, he studied under Prof. William Bennett in London, and in 2006-2007, under Prof. Barbara Gisler-Haase in Wien. Also, the musician participated in master-classes given by such professors, as Emmanuel Pahud, Wolfgang Schulz, Jeffrey Khaner, Phillipa Davies, Lóránt Kovács, Christian Larde, Ian Clarke and Jean-Claude Gerard. In year 2010 Giedrius Gelgotas has gained his PhD degree at the Lithuanian Academy of Music. Since 1996 Giedrius Gelgotas start to play at the Lithuanian National Opera orchestra, 2006-2008 he was invited to work as professors assistant at the William Bennett International Summer-School. 2007-2008 – principal flutist at the Cairo (Egypt) National Opera House orchestra, 2009 – flutist at Barcelona (Spain) symphony orchestra. 2010-2015 principal flutist at the Lithuanian National Opera orchestra. Since 2015 – co-principal flutist at the Lithuanian National Filharmony Symphony orchestra and flute professor at the Music Academy of Vytauto Didžiojo University.

​In 2014 Ugnius Dičiūnas was given an award by the President of the Republic of Lithuania for his musical achievements. Ugnius Dičiūnas attended masterclasses with professors László Hadady, Omar Zoboli, Kalev Kuljus and in 2015-2016 studied at the Prague Academy of Performing Arts in the class of prof. Jana Brožková and prof. Liběna Sequardtová.​In 2016 he won 3rd Prize (no first prize given) at the 1st International Juozas Pakalnis Woodwind Competition. ​Ugnius Dičiūnas is currently a musician of the Lithuanian State Symphony Orchestra.

Andrius Žiūra (clarinet) – a prize-winner of international as well as Lithuanian competitions. In 2002-2003, Andrius Žiūra studied in the USA under Prof. Larry Maxey. Also, in 2003, the musician participated at the Oklahoma Clarinet Symposium. The artist has participated actively in master-classes given by such professors as Richard Hawley, B. Harra and Ricardo Morales. Andrius Žiūra has given many solo concerts with various orchestras and chamber music groups, has participated in festivals in Lithuania, Latvia, Russia, France, Denmark, and Sweden. Since 1998, the musician has been working at the Lithuanian National Symphony Orchestra.

In 2000 he was accepted by the University of Troms in Norway and was awarded a Bachelor Degree for Solo Horn and Chamber Music (Professor Kjell-Gunnar Sollie).

In 2006 he gained a Master degree at Lithuania‘s Music and Theater Academy.

Andrius was constantly gaining experience and growing stronger while being trained by many well-known horn performers. He is the prize-winner-laureate of many local and international contests.

At the moment Andrius Dirmauskas is the principal horn of Lithuanian National Symphonic Orchestra.

Andrius Puplauskis (bassoon) – a diploma holder and prize-winner of international and national competitions. The musician has participated in many international master classes in Lithuania, Germany, France, Russia, Sweden, has performed solo concerts with orchestras, as well as with different chamber music groups and different music styles – classic, contemporary and jazz music projects. Since 2000 he has been working as a principal bassoon at the Lithuanian State Symphony Orchestra. Now Andrius Puplauskis is professor at the Lithuanian Academy of Music and Theater, gives master classes, often is jury member of international woodwind competitions.

Although relatively young, the Philharmonic Winds LT has already taken part in such festivals as Sugrįžimai (Vilnius, Lithuania), Druskomanija (Druskininkai, Lithuania), Sekmadienio muzika (Kaunas, Lithuania), FIMU (Belfort, France), the international festival of classical music the Musical summer in Kuzminki (Moscow, Russia) and the Christopher Summer Festival (Vilnius, Lithuania). The quintet has given concerts in Lithuania, France, Russia and Switzerland. With the help of the Classical Music Fund of the company Baltic Optical Disc and the Ministry of Culture of the Republic of Lithuania, the FIlharmonic Winds Quintet recorded and published its first compact disc in 2005. The repertoire of the group is comprised of the music by Wolfgang Amadeus Mozart, Franz Danzi, Paul Taffanel, Anton Reicha, Henri Tomasi, Samuel Barber, Luciano Berio, Malcolm Arnold, György Ligeti, Jean-Michel Damase, Julius Juzeliūnas, Rūta Vitkauskaitė as well as the pieces for quintets by numerous other composers from various epochs. In order to better reveal the peculiarities and possibilities of the instruments to the audience, the members of the quintet often include solo, duet pieces as well as other ensemble compositions into their concert programmes. Moreover, the quintet is expanding the repertoire for woodwind instruments through active cooperation with contemporary composers.

In 2007, the quintet won the first prize as well as the award for the best performance of the obligatory piece at the Henri Tomasi International Competition for Woodwind Quintets in Marseille (France) and as the result has achieved international acknowledgement.